Just imagine. You’ve been waiting for your vacation in the Dominican Republic for so long. And now your plane has landed at the airport. You’ve passed the passport control, got your luggage. You have already begun to imagine how you will put up at your ideal ocean-view apartment…

Bachata is a type of Latin American music that arose in the Dominican Republic in the first half of the 20th century. Bachata combines European, Indigenous and African musical elements. It is a rhythm of love, melancholy and abandonment. Bachata is a melody that attracts the attention with its sensibility.

The first Dominican music named bachata was recorded immediately after the death of Trujillo, whose 30-year dictatorship was accompanied by censorship. Thus José Manuel Calderón is the first bachatero who recorded the first bachata singles “Borracho de amor” (-“Drunk with love”) and “Que será de mi” (-“What will become of me”). Both singles were released in 1961. 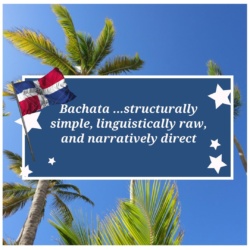 Despite the popularity, the higher echelons of the Dominican society considered the bachata music as an expression of cultural backwardness and as a rustic musical genre. That´s why the 1970s were a dark period for the bachata style. Instead of high society venues, bachateros performed in the country’s poorest bars and cathouses. Thus, sex, debauch and crime influenced the music, that was associated with rural underdevelopment, became the main features of the genre.

However, in spite of the existing in those days censorship, by the early 1980s bachata became very popular. As time went by, bachata has been further modernized. Thus by the 1990s appeared the first generation of pop bachata artists represented by Luis Vargas and Antony Santos. Both immediately became popular in the country and then the genre began to emerge outside the Dominican Republic.

The genre reached its greatest popularity in the beginning of the 21st century, when it transformed with the creation of Urban Bachata styles by bands such as Monchy y Alexandra and Aventura. Nowadays, bachata is a Dominican music genre that is one of the most famous Latin rhythm easy to recognize from the first notes. The form of dance, bachata, also developed with the music. Now it is famous all over the world like one of the most sensual and passionate dance.

Merengue itself is a fusion of European and African cultures. It is a type of music and dance originating in the Dominican Republic, which has become a very popular genre throughout Latin America, and also in several major cities in the United States which have Hispanic communities. Typical songs generally have two parts. Thus, the first section is rhythmically straightforward and introduces the song’s melodic and lyrical material. Improvisation, more complex rhythms, and hard-driving mambo dominate in the second section. 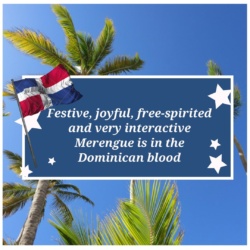 Merengue appeared in the DR at the end of the 19th century, where in 1850 it became fashionable. From the beginning, the genre was interpreted with the instruments that people possessed and that were easier to acquire.

The oldest form of Merengue was typically played on stringed instruments. However, when the accordion came to the island in the 1880s, introduced by German traders, it quickly became the primary instrument, and to this day is still the instrument of choice in Merengue tipico. Later, merengueros introduced the piano and brass instruments.

The Dominican dictator, Rafael Trujillo, who reigned from 1930 to 1961, promoted even more the genre. Indeed he turned it into the Dominican national music and dance style. In the 1970s, the musical genre exploded forever. For example, the theme of Wilfrido Vargas El Jardinero became instant classics. Merengue has an explosive rhythm and is extremely dancing.

Salsa is a popular music that initially arose in New York City during the 1960s. It is the product of various musical genres including the Cuban son, guaracha, cha cha chá, mambo, etc. An additional point is that Latin jazz, which also developed in New York City, has also had a significant influence on salsa. 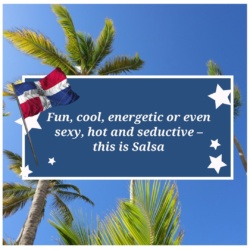 It was generally Cuban-style dance music, the son, which was popular since the 1920s. In the 1940s, the son was further Afro-Cubanized with some instuments such as congas and faster tempos, and by the incorporation of jazz-influenced arrangements. Due to the mixture of different styles and musical instruments, the musical genre has a name Salsa (sauce).

This musical genre was a product of the turbulent 1960s. Johnny Pacheco is known as the Dominican who found Fania Records in New Yourk in 1968 and gave a commercial name salsa music. He was a producer, bandleader and was an excellent musician of the genre.

The music became a symbol of pan-Latino ethnic identity. Now it is an international genre, and in the Dominican Republic, as elsewhere, it functioned as a symbol of Latino cultural resistance to gringo Coca-Colonization. Since the mid-1970s, radio stations began to promote sentimental salsa romàntica of crooners like Mark Anthony. Thus, the more aggressive, proletarian, Afro-Caribbean songs and sounds started to disapear.

Meanwhile, salsa became an important part of the music scene in Cuba, Puerto Rico, Colombia, the Dominican Republic, Venezuela, Panama. With the arrival of the 21st century, this musical genre has become one of the most important genre of popular music in the world.

Reggaeton is a musical style and dance that arose in Panama and Puerto Rico under the influence of reggae, dancehall and hip-hop, and became widespread in the Latin American countries of the Caribbean, as well as among Hispanic people who live in the USA. 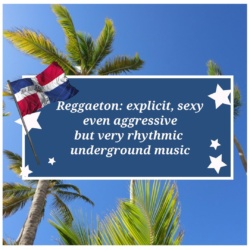 This Dominican music genre took its first steps in Panama in the 60’s, where the Jamaican community began to introduce reggae mixed by different genres such as calypso or dancehall, and later was fully developed in the 90’s in Puerto Rico.

Reggaeton is a young Punta Cana music genre known as “underground” music, due to its circulation through informal networks and performances at unofficial venues.

The instruments of reggaeton are usually electronic. As a youth culture, people often criticize it. This Punta Cana music genre has explicit lyrics about drugs, violence, poverty, friendship, love and sex. Thus, some reggaeton songs are criticized for being little elaborated, but in recent years, the genre has been modified.

Nowadays the lyrics ranges from anecdotes, romantic, heartbreak, sad texts, etc. The genre’s popularity increased when it the international audiences discovered it during the early 2000s.

At that time a type of reggaeton, called dembow, became very popular in the Dominican Republic. Dembow is a musical genre originating in that country, which first appeared by the middle of the 1990s. Although this type of music has had a boom in the decade of 2010, rap and hip hop influenced a lot its origins.

The nascent stars of the Dominican dembow are young people from marginalized neighborhoods, who usually do not produce their singles for the purpose of artistic expression, but rather as a legal and quick means to get out of poverty without chasing into criminal acts.

Several years ago reggaeton as well as dembow gained more popularity in the United States, especially among the Dominican population living there. And both of them are currently very popular throughout Latin America and even in several European countries.

Typically characterized as simple, festive, free-spirited and very interactive merengue rhythm, unique and very romantic bachata, sentimental or joyful salsa, or even rough, monotone rapping with dancehall riddims, called reggaeton, in other words this music will not leave you indifferent.

During your stay in the Dominican Republic do not miss the opportunity to go to live merengue or salsa concerts or the festival of Merengue and Caribbean Rhythms held annually in the Puerto Plata Province, Dominican Republic. You can also listen to the Dominican music in bars, at the disco or go to special bachata camps. In such camps you will obviously enjoy the hot Caribbean sun and sea and completely immerse yourself in the world of music and dance.